The epic adventure begins . . . Cloudburst is the first book in the Jack Courtney adventure series, for a whole new generation of fans! 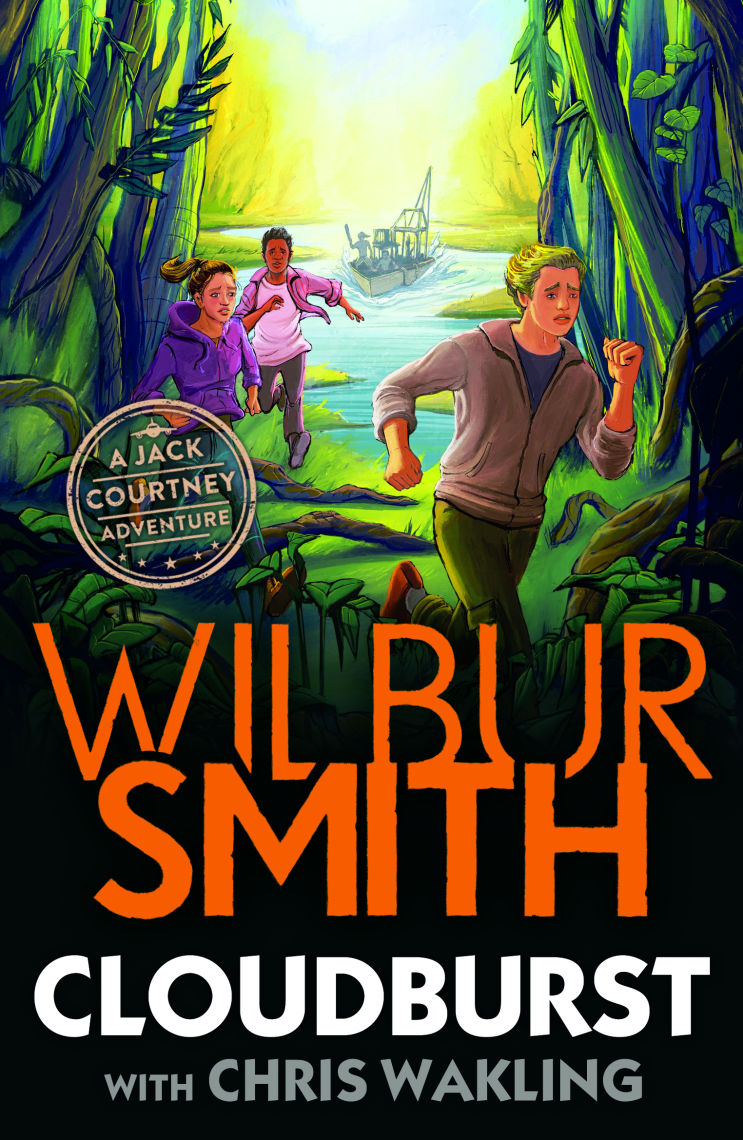 The Courtney’s debuted in my first novel, When the Lion Feeds, published way back in 1964. Since then they have become the longest running family saga in publishing history, spanning over twenty books and fifty years. I am often prompted by my fans asking me what has happened to a certain character – what are they up to now? I then begin to ask myself my own questions. Now, with the help of Chris Wakling, I’ve been able to explore in Cloudburst how the Courtney family dynamic is playing out in our modern times. I wanted to explore the resource curse of Africa and was inspired by what young people are doing to question what is happening with the environment. It felt like a good idea to try to speak directly to them through my characters and my writing. I hope you enjoy it.

Jack Courtney has lived in the UK his whole life. But this summer his parents are travelling to the Democratic Republic of the Congo for a gorilla conference, and they've promised to take Jack and his friends with them.

When his parents go missing in the rainforest, abducted by mercenaries, nobody seems to have any answers. Jack is pretty sure that it's got something to do with the nearby tantalum mines, but he needs to prove it. Along with Amelia and Xander, Jack must brave the jungle to save his parents. Standing in his way is a member of his own family - Caleb Courtney.

There are western gorillas, forest elephants and hippos. But there are also bandits, mercenaries and poachers. The three friends will need their wits about them if they are not only to save Jack's parents, but their own lives too.

Share the adventures of Wilbur Smith with a new generation with this epic adventure for younger readers aged 10 years and over!

Now available: Study Cloudburst with your students or children using the Teacher Resources pack. Download your copy for free.

Read a sample
See all books

For younger readers aged 10+. Set in the modern day, The Jack Courtney Adventures follow 14-year old Jack Courtney and his friends Xander and Amelia on adventures across the world. 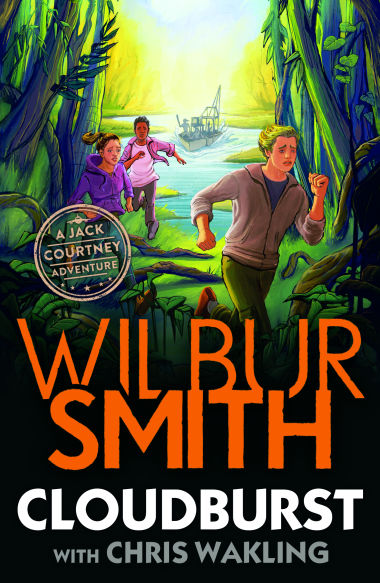 Book 1 in the The Jack Courtney Adventures

'The epic adventure begins . . . Cloudburst is the first book in the Jack Courtney adventure series, for a whole new generation of fans!'

A sample from Cloudburst

I was asleep when the airliner hit turbulence. It must have dropped a hundred metres in half a second. The swooping up-rush launched my stomach into my chest and my head grazed the ceiling before my bum slammed back into the seat. I opened my eyes as an electronic warning bell started pinging above us. The ‘fasten seat belts’ light came on.
‘Bit late for that,’ I said to Amelia beside me.
‘I never unbuckle mine,’ she explained, showing me the snug clasp before returning to whatever she was doing on her phone. Reprogramming it, probably.
‘Of course you don’t,’ I said, just as the plane bounced hard again.
Mum craned round from the seat in front. ‘You OK, Jack? Amelia?’
‘Just fine . . . Why wouldn’t we be?’ we said over the top of one another.
The co-pilot’s voice oozed out of the speaker, full of reassurance: ‘Ladies and gentleman, we seem to have run into some unexpected weather. We’ll do our best to skirt it, but in the meantime, for your comfort and safety, we ask you to remain seated with your seat belt fastened.’
Beyond Amelia was the porthole window. I leaned across her to look out of it. The endless blue sky was dotted with occasional clouds, but it didn’t look particularly stormy. I could make out the lush green rainforest below us without difficulty.
‘Seems like a nice day to me,’ I said.
‘The Democratic Republic of Congo averages more thunderstorms per year than anywhere else on earth,’ Amelia replied.
‘Good to know. Still, not today, eh?’
As if to prove me wrong, at that moment the plane hit another airborne speed bump, hurling me sideways in my seat. I burst out laughing. Up until this point the trip from London to Kinshasa via Brussels had been long and boring. This was fun.
Mum, however, is a nervous passenger at the best of times. Through the seat gap ahead, I glimpsed her neck, rigid with fear. More loudly than she meant to, she said, ‘Will the plane cope, Nicholas?’ to Dad, who was in the seat next to hers.
‘Of course,’ he said, stroking her hand on the armrest.
Unfortunately, Amelia heard what Mum said too. Amelia always means well, more or less, but has a knack of saying the wrong thing. Now she leaned forward and said, ‘Mrs Courtney, the wings on an Airbus A330 are tested to more than 5.2 metres of displacement. It would take an extraordinarily abrupt pressure differential to rip them off.’
Mum withdrew her hand from under Dad’s, her knuckles white.
‘Where do you get this stuff?’ I asked Amelia.
‘What stuff?’ she replied, genuinely confused.
Amelia’s mother met mine on the maternity ward fourteen years ago; we’ve known each other since we were babies. How her mind works, though, I’ll never understand. It’s not short of processing power, I admit, but she uses that power for the strangest things.
‘Amelia means we’re perfectly safe, Mum,’ I said, as another wedge of turbulence lifted me, grinning, from my seat. ‘The wind’s just giving us a helping hand. We’ll be in Kinshasa in no time.’

I was wrong about that. The jagged air got worse. Someone a few rows back threw up (and I mean up) and somebody near the front lost it completely and began wailing. A few minutes later, although I still couldn’t see anything other than blue sky out of the window, the co-pilot’s super-calm voice informed us that the weather had closed in on Kinshasa. For safety’s sake, we were being diverted from N’Djili Airport to somewhere else beginning with R, or it might have been D. Either way, Amelia immediately informed us that it was five hundred kilometres away. This news turned Mum’s fear to frustration: she forgot her concern that our wings might fall off and set to worrying that we would miss the first of the meetings she’d scheduled in the lead-up to the environmental summit she and Dad had flown all this way to attend. I tried to placate her.
‘It’s only a few hours’ drive, Mum.’
‘On a tarmac motorway, yes,’ Amelia pointed out. ‘But that distance can take days on dirt roads, particularly in the wet season, which it is now,’ she added helpfully.
Dad also tried to reassure Mum all would be well. We’d be there in time to make a proper impact on the big vote, he said, but his voice had the same tone he used when he told me boarding school would be a walk in the park – which it hasn’t been – and I could tell she didn’t believe him either.
This vote that Mum and Dad – Janine and Nicholas Courtney, joint founders of the Courtney Conservation Foundation, to give them the names by which they wield such influence among environmental campaigners – were hoping to help get passed, was the latest in a long line of interventions staged by the Foundation. Ever since they took early retirement from their finance jobs in the City, eco-activism through the Foundation has been their thing. It’s a pretty generous way to spend their time and money, I suppose, but if I’m honest, although I completely back the whole save-the-planet thing, I can’t get quite as excited about it as they do. Which was why Mum had insisted I come along on this trip. While my parents would be lobbying business leaders, government officials and ministers in the capital, Kinshasa, Amelia and I were set to go on safari in one of the country’s national parks, to check out the natural wonders Mum and Dad were here to protect. Though she hadn’t spelled it out, I knew Mum was hoping that once I saw first-hand what was threatened, I’d be more keen to do my bit to help. And maybe I would. I was certainly up for seeing some gorillas. Either way, the gorillas’ habitat, and the big vote about whether to protect it or sell it off to mining companies, was the reason we were now coming in to land at the wrong airport somewhere in the Democratic Republic of Congo.
For ages there’d been nothing but trees visible below the plane. As Amelia pointed out, I was looking at the second largest rainforest in the world, after the Amazon, in a country roughly the size of western Europe, slap bang in central Africa. I couldn’t help thinking that if the gorillas weren’t able to sort themselves out down there, the Courtney Foundation would have its work cut out to help them, but I didn’t say that to Mum, obviously. I’m not a total idiot. Instead I listened as Amelia, who – true to form – had done her research, gave a mini lecture on the ‘endemic corruption’ the citizens of the Democratic Republic of Congo have to put up with.
‘It’s rife,’ she said. ‘As in quite possibly the most corrupt country on earth. There’s more mineral wealth in the ground here than just about anywhere else, and yet the people are among the world’s poorest. Even those who do the digging for the gold, cobalt and tantalum – which is used in mobile phones – barely see any of what it’s worth. Foreign companies from China and the West bribe corrupt officials, buy up what’s dug out for a pittance, sell it overseas and pocket the profit. Unless the government steps up properly – which is what the vote your folks are here to influence is all about – the country will have lost ninety-five per cent of its rainforest within the next eight years. Add in the militia, who’ve turned much of the country into a war zone, and the deforestation for charcoal, and the threat to wildlife from poachers . . .’
She tailed off. Looking at the calm green landscape beneath us, it was hard to believe the scale of the issues. But Amelia doesn’t lie – it’s one of the things I like best about her – and Mum and Dad wouldn’t be focusing their efforts here if it wasn’t necessary.
The pilot hit the brakes hard when we did finally touch down. That was the scariest moment for me. As with any jump, landing is the hardest part. We juddered to a crawl at the end of the runway, the seat belt tight across my lap, and then doubled back to the little terminal.
Passport control was two guys. Ours was wearing a hat about four sizes too small for his head. When I made the mistake of nodding for Amelia to check him out she said aloud, ‘That’s for a child; it must be uncomfortable,’ and for an awful moment I thought the man had heard, since he gave us one of those very hard stares. What Dad had told me about the country being sketchy – skirmishing militia, tourist kidnappings and an epidemic of street robberies – came to mind. Apparently Dad had arranged for us to be chaperoned on our safari by ex-military guides, to head off any threat. ‘We Courtneys will not be intimidated, but I’ve taken every precaution to make sure you kids are kept safe. We can’t be too careful here,’ he’d said.